In this tutorial, we’re going to discuss how to use AmpMe App for various gadgets like Android & iOS.

Since the introduction of smartphone technology couple of years back and subsequent increase in the numbers of apps to be used on these smartphones, we have seen improvement and advancements on the nature and functionalities of these apps almost on daily basis.

Today, while most apps can be used to keep you healthy, some can be used to improve your communication skill, prepare you for exams, and much more. In fact, there isn’t anything you need now that you wouldn’t find the app to accomplish that on the internet.

If you are a music lover, you will definitely agree with me that music is best enjoyed when you play them on a big speaker the more the sound the better. Unfortunately, not all of us have access to such speakers. Buying such speakers will mean making more investment and also finding space for them, not everyone can afford that.

Fortunately, you don’t have to worry about that anymore, thanks to this innovative app called AmpMe. This app is revolutionizing the way we play music. Before AmpMe, it is either you invest in a quality large speaker when you want to listen to your music or you forget about it.

However, with this app, you don’t have to choose anymore. They have succeeded in doing what other apps before it have failed to do. AmpMe is now telling the whole world that you can still enjoy your music even when you don’t have access to multiple speakers. In fact, you don’t even need external speakers such as home theaters, all you need is to have few friends with their smartphone or tablets around and you can turn your friends’ smartphones into one large speaker.

AmpMe was created by a programmer, Martin-Luc Archambault. According to him, he was motivated to create this app when he was with a friend who just moved. He wanted to play music to celebrate the move, unfortunately, there are no speakers around so he has to play with his phone, but it sounded bad.

Then it hit him that we all have speakers in our pocket. This motivated him to do something about it. A few years later, he was able to create a free app that allows you sync various phones together to act as a giant speaker.

Features of AmpMe: What Does it Do?

AmpMe was created to act as a giant speaker without actually investing in a speaker. The logic is a pretty simple one. You don’t have to buy more speakers as far as you are with your friends.

Let’s say you find yourself in a classroom full of other students with their smartphones. You can easily tap into their various phones with this app and play the same music together. This will make your music to sound better just like when you are using a giant speaker. 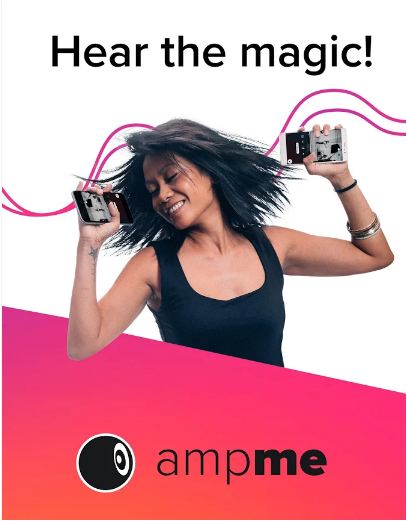 How To Use AmpMe on Android & iOS?

The great thing about this app is that it is available on various operating systems and gadgets. It doesn’t matter whether you are using Android or iOS operating system, you can easily use AmpMe on these devices.

Currently, this app is compatible with your personal music library, SoundCloud, and more recently, with Snapchat. According to the CEO of the company, we should expect more streaming services to be available on the app in the near future.

How To Use AmpMe App?

Once you have downloaded it, you will have to choose between hosting and joining the party. If you want to host the party, the app will generate a 4-digit Party Code on your screen. Now, all you will have to do is tell your friends this code and they can use the code to join the party.

Note that your friends will need to have AmpMe installed on their smartphone or devices for this to work. Once your friend pair with you using the code generated, you can be able to play your music using all the paired speakers.

AmpMe is free and doesn’t really need an internet connection. It also doesn’t make use of Bluetooth. However, AmpMe utilizes a proprietary audio matching technology through microphones found on a mobile device. Just like expected, the sound can get really loud when you are using so many speakers. You shouldn’t expect the performance of bass to be on par with your home theater system, but with several phones synced together, the audio is louder and very impressive.

We spotted each and every information on how to use AmpMe App in a detailed manner. There is no doubt that AmpMe is a revolutionary app. It made its debut in September 2016 and has succeeded in getting over 1.5 million downloads and counting. If you want to enjoy quality music when you are with your friends, downloading and installing AmpMe on your gadget is the way to go.