Have you ever been in a little trouble when having a party or reunion, because the sound system went out of battery or was simply forgotten and your cell phone speakers were simply not enough? This sounds a little bit of a tongue-twister but we are quite sure that you have all passe trough this situation at least once (but probably several times). Well, this problem is finally solved with the best and ultimate sound system app that is AmpMe app.

What is AmpMe App & How to use it?

AmpMe as its name may imply is an amplification app that allows you to connect your smartphone to all your friend’s smartphones speakers in order to create a sound system where all of those devices will play the same music at the exact same time.

Imagine having the power for turning all your friends into an ambulant speaker, imagine it’s better and louder with every new guest because it’s almost limitless. And everybody carries their phones over all of the time, so forgetting and out-of-battery problems are not problems anymore.

The best part is that all you have to do is download the app in every device available. One device must act as “host” and is that device chooses the music. Once every phone has the app and executes it. The music will automatically play at the same time in every smart device in the room.

There’s no need for wifi or Bluetooth connection for the app to work. As it creates its own code or print that will react to every device with the AmpMe installed. The music can be selected from a personal library, SoundCloud or YouTube so the options are huge. 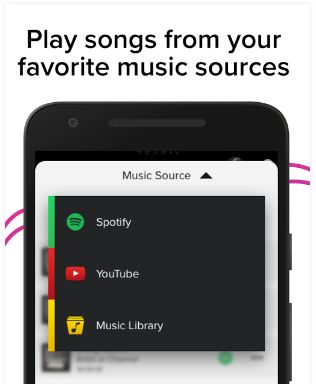 As AmpMe apk is officially available for Android, all you have to do is enter the Google Play Store, search for the app and then click “install” and it would automatically start downloading and installing. Do this on every Android device you want to connect to the host.

How to install the AmpMe on Bluetooth speakers?

For installing the AmpMe on this kind of speakers, all you have to do is downloading the app to an Android device that will be connected via Bluetooth to the speaker and therefore reproduce the music.

This process should be repeated in a different device for every speaker as the only limitation is that you can connect only one speaker to each phone. But the amount of devices you can connect is limitless.

You can’t actually download the AmpMe directly to a computer or laptop. But if you follow these steps you will be able to install the AmpMe on PC.

Recommended: Do you want to play your favorite music louder in a party? Then follow this link and play from your music library or from the YouTube.